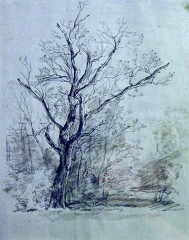 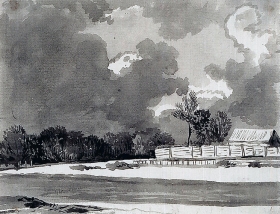 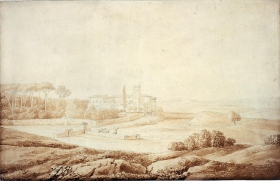 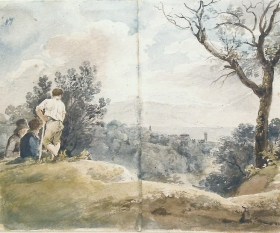 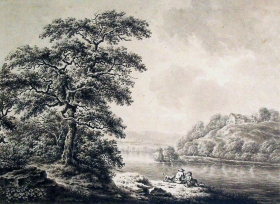 David Nolan Gallery is pleased to announce an exhibition of 19th century Romantic drawings by German artists.
The age of Goethe (1750-1850) witnessed the transition from Rococo to Neoclassicism to various permutations of romanticism and realism. Working under the auspices of the Enlightenment, a period of radical intellectual, social, economic and political change, German artists found the inspiration they needed to break free from stifling regime of academic traditions and to employ an unsparing realism in their new works. In consequence, each drawing in the exhibition accesses a quest for personal truth, self-awareness or in some cases a unified German identity.
Instead of copying from models as was traditionally done during the Dürer period, the age of Goethe celebrated the direct study of nature. Landscape and the image of man prevailed as the most popular themes of this time. Ludwig Richter explained: "We fell in love with every blade of grass, with every delicate twig, and did not want to miss a single appealing feature." Responding to Enlightenment ideas, 19th century artists found individual expression in a multitude of trends. Johann Georg von Dillis created unusually lively, idealized compositions of English Garden landscape in loose pen and brush strokes; a departure from the traditionally calculated approach that served as a metaphor for the liberalized social order. Humanist philosophies stirred within Christian Reinhart a similar creative unrest, or a so-called Sturm und Drang [Storm and Stress], which is manifest in his free style. Seduced by more scientific ambitions, Johann Heinrich Wilhelm Tischbein responded to a popular Goethe era discussion on physiognomy in his portraits. His single color pure profile portrait silhouettes, also called Schattenriss or "shadow cut," offered the highest degree of simplification of the individual likeness, and later became the insignia of the age. Nazarene Julius Schnorr von Carolsfeld embraced the popularity of portraiture as a way of imparting his religious sensibilities onto the world. His early 19th century compositions taken from the Old Testament stand at the beginning of a nearly forty-year- long involvement with the project of illustrating the Bible, which was eventually published and bound in popular, luxurious editions in 1852. In retrospect, drawing was the essential expression of the age, in terms of its eclectic influences, subject matter and position as a catalyst for new print technology.

While the drawings in the exhibition have a seemingly archaic quality, perhaps due to the elemental nature of the line, they are intimately tied to twentieth century art. The age of Goethe validated drawing as an autonomous medium. Rather than merely serving an auxiliary purpose, drawings were appreciated in their own right, a trend that is still celebrated today. In addition, a stylistic connectedness is evident in the later works of German draftsmen, especially in the work of Adolph Menzel. His bold perspective and aim to capture the spontaneity of an unraveling scene reveals that Menzel and his contemporaries were precursors of Degas and Toulouse – Lautrec.