Alice Maher
Still from "Godchildren of Enantios"
2010
DVD with sound by Trevor Knight
6:41 min
Edition of 3
AM3495 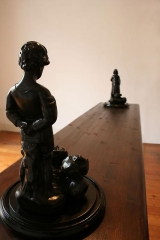 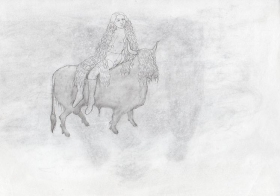 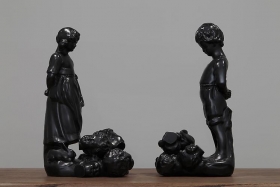 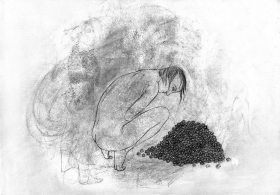 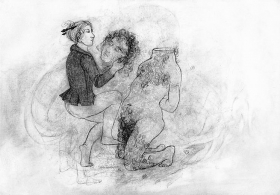 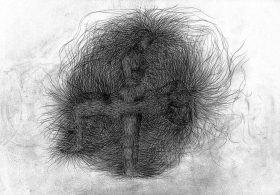 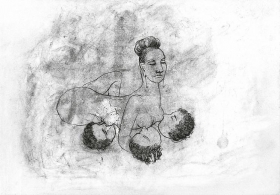 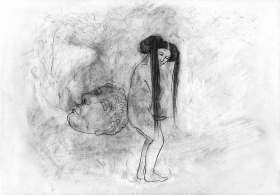 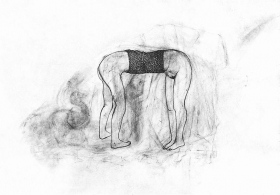 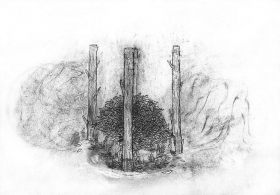 David Nolan Gallery is pleased to announce the opening of Alice Maher: Godchildren of Enantios. The exhibition includes four video works, sculpture, and prints from the last two years.

Alice Maher’s imaginary world is rich in references to myth and legend. Attracted to the notion of extremes, to dialectical forces battling themselves out, Maher embraces all at once the beautiful and the grotesque, the decorative and the minimal, the sweet and the menacing. Maher’s work investigates the Jungian term ‘enantiodromia’ (from the Greek word enantios meaning ‘opposite’), a theory that the superabundance of any force produces its opposite. In fairy tales, the narrative is primarily concerned with good versus evil but in Maher’s work, opposites often overlap and merge with each other to form a new and alternative tale with limitless permutations of theme and outcome.

This show extends Maher’s exploration into new media with four works, which the artist calls ‘film drawings’, all of which follow the metamorphoses of one simple but ever-changing drawing through thousands of changes, slips, erasures and transformations. Beginning with a sheet of Hahnemuhle paper, the artist scans each stage of the pencil drawing at 10-minute intervals, preserving the images as documents in a computer until the paper itself is ruined and no actual drawing remains. Maher’s technique is simple, yet there is a sophistication and wit at play in her weird polymorphic imagery, which does not allow for any fixed meaning to emerge and breaks all the rules of conventional animation. Here, everything appears to turn into its opposite, and any attempt at narrative is annihilated before it can take hold. People, animals, plants and objects all co-exist, cavort, copulate, do combat and disappear to a soundscape by composer Trevor Knight that entwines itself in the unfolding imagery as a surprising punctuation rather than as a musical accompaniment. The films are all shown in the same space on continuous loops so that visual and aural areas overlap, adding to the experience of unstable narrative and free association.

Though the individual drawings, which make up the film sequences, exist for only a brief second in real time, their digital record provided the artist with references for a set of 7 intaglio prints, collectively called The Music of Things, presented in a box set by Stoney Road Press.

The Godchildren of the title are embodied in the show as two re-cast mantelpiece figurines of an idealized boy and girl. The bucolic playmates gaze calmly downwards at the bodiless heads at their feet, as though pausing in their game.

Alice Maher has been in numerous solo and group exhibitions and her work is represented internationally in museum and private collections. In 1986, she was the recipient of a Fulbright Scholarship, and in 1994 she was one of three artists representing Ireland in the 22nd Sao Paolo Biennale in Brazil. The Irish Museum of Modern Art in Dublin will mount a retrospective of Maher’s work in 2012. The artist currently works in Ireland. This is her third exhibition with David Nolan Gallery. 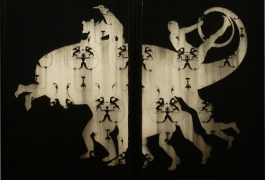 Alice Maher
Back To Top