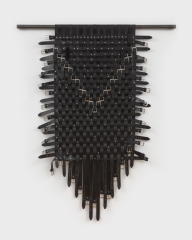 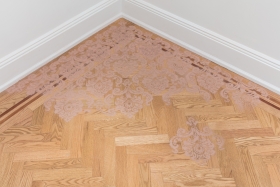 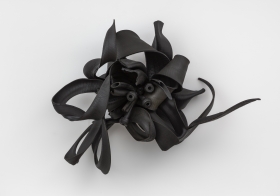 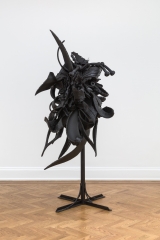 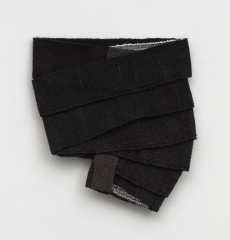 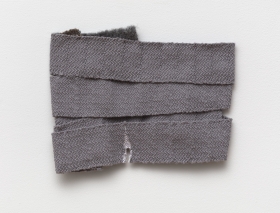 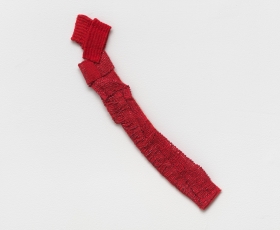 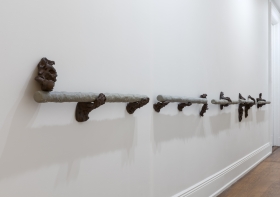 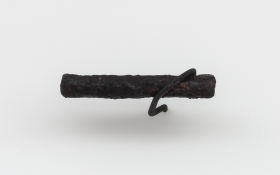 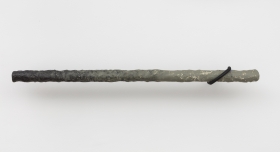 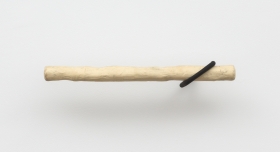 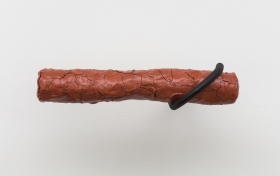 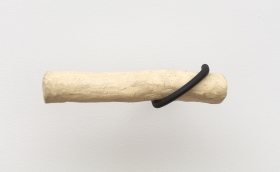 David Nolan Gallery is pleased to present “As Above, So Below,” a group exhibition featuring Brígida Baltar, Monica Bonvicini, Chakaia Booker, Hana Miletić, and Gabriela Salazar. The exhibition gathers five international artists active across disparate media and disciplines, united in their unwavering commitment to materials and paradoxical potential for transformation and regeneration.

Since the mid-1990’s, Monica Bonvicini has used mundane and industrial materials in her work to critique the language and structures of power and architecture as gendered symbols of domination. In BeltDecke #4 [Belt Blanket], a tapestry of interwoven black leather belts hangs tough, yet limply, as if coming undone. Formally it may suggest a military pennant, yet it is clearly hand-woven, alluding to crafts traditionally associated with women’s labor, conflating domesticity with the military-industrial complex. At once seductive and antagonistic, Bonvicini’s work treats fear and desire as equally commodified and fetishized.

Brígida Baltar began working within the intimate confines of her home in Botafogo, a neighborhood in Rio de Janeiro, in the early 1990’s, performing “small poetic gestures” and documenting actions with photography, drawing and sculpture. The bricks derived from that residence have been a continuous element of her practice, as a corporeal presence that unites past and present. In A horta da casa [The Home Garden] a pseudo-minimalist linear composition of bricks transforms into a personal garden, sprouting various herbs and spices over time. Upon close inspection the bricks are irregular and flawed, originating from Baltar’s said personal interior, each imperfect and barely stable, providing the precarious support for an ever-evolving landscape. In Canto brocado [Corner brocade], brick turns to literal and ornate dust, and a decidedly pre-industrial installation evoking Brazilian edifice and structural support in turn converts into a phantom space for architectural and psychological shape shifting, whereby the personal becomes collective memory.

Chakaia Booker has worked with her signature material, rubber tires, since the 1980’s, when she first began to consider the material in relation to the body and specifically, wearable garments. Her singular practice has exponentially transformed the material in subsequent decades into works of immense scale and beauty. Splintered Reality greets the viewer head on, at once familiar and threatening, the toughness of its construction bellied by its intimacy and interior potential. Its tactile quality is matched by the pungent odor of the rubber, which only heightens the physical experience of the work. Booker’s practice is situated between the industrial and ecological, recycling the ubiquitously discarded and worn-out tires into transformative works of universal impact and potential. While the material is uniform, Booker’s techniques range from shearing, weaving, riveting, and twisting into organic, expressive forms that steer toward abstraction but often anthropomorphize and historicize the physicality and labor inherent in her practice.

In Hana Miletic’s practice, the domestic and laborious act of weaving is linked with the social and documentary photography of her subject matter: the haphazard repairs she witnesses in public space. As part of Miletić’s ongoing body of work, “Materials,” the three works on view are formally based on incidental acts of mending the artist finds in the streets of her native Zagreb, and Brussels, where she is partly based, e.g., a cracked rear view mirror hurriedly mended with red tape, a dilapidated building façade barely held in place.

These quotidian displays of decay of public and private properly inform the artist’s choices of color, shape, and texture. The intimacy of scale, the intricacies of the weave, and the deliberate selection of wool, silk, or synthetic fibers, all elevate and prioritize the methodical, meticulous, and purposeful over the standardized and de-personalized production that is the global industrial norm, and so in turn, Miletić brings to the fore the politics and poetics of labor.

For Gabriela Salazar, the architecture and fragility of interior spaces is in constant flux. Her work often situates between spaces, suggesting instability and ephemerality, specifically as it relates to a constructed space. Her ongoing Hook Crook and Supports series suggest handrail-like structures struggling to contain or support; weathered and tactile, these clay, plasticine, and ceramic hybrid objects appear to have been handled by countless bodies yet lead nowhere certain. For the site-specific Supports (Seized) installation, Salazar chose to respond to the gallery’s new location and its hidden and modified architecture by drawing attention to a ghostly door that was boarded up by a former tenant. Similarly, a passageway becomes the site for another psychologically charged work which serves to both literally and figuratively connect the opposing rooms and bridge the space between body and structure.

As an exhibition, bringing these artists together allows for a multitude of readings and dualities, of public and private, chaos and control, of ephemerality vs. permanence, readymade vs handmade, natural vs industrial, and so on. The phrase “As above, so below,” likewise has numerous associations and connotations. It encompasses a plethora of open-ended and often antagonistic concepts: sacred geometry, the biblical and the occult, alchemy, theurgy, Hermeticism, the Tarot, Synchronicity, earth and the cosmos, microcosm and macrocosm, and all of their perpetual paradoxes, both literal and metaphorical, i.e., what happens on one level of reality (be it physical, mental, or emotional) also happens on every other level.

An aside, further on the cosmos:

In middle of the exhibition - on December 21, 2020 to be exact - Saturn and Jupiter will appear to trade positions at roughly zero degrees in a phenomenon known as “the Great Conjunction,” which occurs every twenty years or so. Both planets – Jupiter, associated with health, wealth, and having a good time; and Saturn, associated with strictness and responsibility - will line up in the same telescopic field of view as a single star, the closest they have been since 1623. As markers of time, conjunctions are thought to set the tone for the forthcoming decade, or humanity’s struggle to achieve a new awakening, so to speak. As omens, they are believed to herald apocalyptic transformations. The phenomenon has been studied by astrologers and political historians alike, explaining everything from banal power struggles in our daily lives to conspiracy theories in presidential politics, as the Great Conjunction often correlates with US elections. [It appears that almost every American president in the last 200 years elected during a year of a Great Conjunction has either died or survived assassination attempts in office: Harrison, Lincoln, Gafield, McKinley, Harding, F. Roosevelt, Kennedy, Reagan, Bush; in what retroactively became known as “Curse of Tippecanoe,” so named after the 1811 battle in Indiana between William Henry Harrison’s army and the Shawnee people].

In all chaos, there is a cosmos. [Carl Jung]