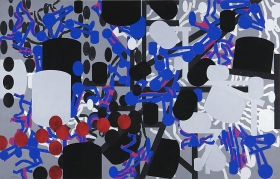 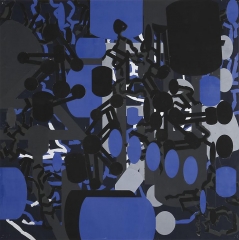 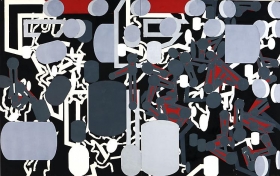 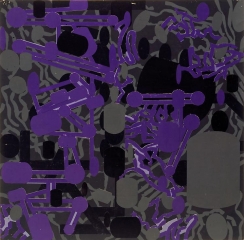 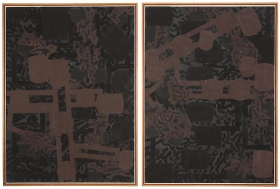 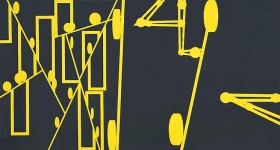 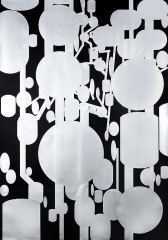 David Nolan Gallery is pleased to announce the opening of “Ink on Paper, Cut and Glued to Ink on Paper” featuring works from the 1980’s by American artist, Barry Le Va (b. 1941). On view are nine large-scale drawings made of cut paper and ink mounted to either canvas or board.

Over the course of his career, Le Va has slowly changed his approaches to material and composition. In the late 1960’s and throughout the 1970’s, he used materials that had an ephemeral and delicate quality to them, like poppy seeds, small stainless steel ball bearings, white chalk, iron oxide, and cut up pieces of felt. He then arranged all of the materials across large expanses of floors in empty rooms. Le Va allowed chance to be a factor in the process though the situations that arose were never completely random—there was deliberateness and intention in the placement and arrangement of the elements. Even the titles of the works themselves contained verbs that described the logical procedure Le Va followed to create them: rolled, cut, scattered, placed, blown, thrown, dropped.

By the 1980’s, Le Va’s sculptures acquired more physicality. They are composed of large aluminum spheres, fiberboard ellipses, hydrastone cubes and wooden ramps that were installed around rooms as though to intentionally obstruct the viewer from moving around them. One could imagine that moving these objects or securing them to walls as Le Va had begun to do would be no easy physical task. The elements then become traces and placeholders of the artist moving around a room, editing and making decisions until the final result is achieved.

The mental and physical always come together in Le Va’s works, not only in his sculpture but also his drawings. His drawings often have a planographic quality, as though they were blueprints, maps or architectural drawings. In the end, some of them do end up being realized as three-dimensional sculptures, but most of them do not. The drawings are to be considered unique works in their own right.
By looking at each of the nine works currently on view at the gallery, one can see the process of their making: large sheets of paper, thick lines of color created by ink and the removal of tape, paper cut-outs of circle, ovals, and ellipses intersecting with camouflage-like tendril forms, all glued on to paper. Each of the elements were moved across the paper by the artist before they were fixed in ink or by glue, much in the same way he would have moved a metal sphere or slab of wood across a room before determining its final resting place within a composition. As Le Va states: “…I move a lot of things around as physical elements. So I also wanted everything in the drawing to be an element I also move around. Not necessarily something that I draw and then erase, like going through the act of drawing; I wanted it to be a more physical act of locating things but still have all the properties I consider a drawing to have.”

Barry Le Va was born in 1941 in Long Beach, California and currently lives in New York City. He has exhibited widely in galleries and museums in the United States and in Europe over the past 40 years and his works have been included in private and public collections around the world. Recent major museum exhibitions include the Museu Serralves, Oporto, curated by João Fernandes in 2006, and Accumulated Vision at the ICA Philadelphia, curated by Ingrid Schaffner in 2005.

Barry Le Va
Back To Top