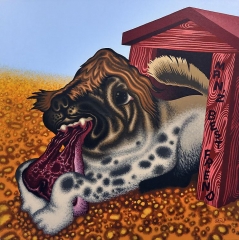 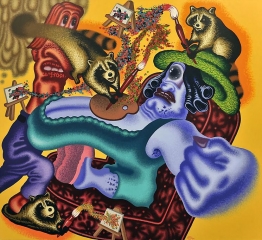 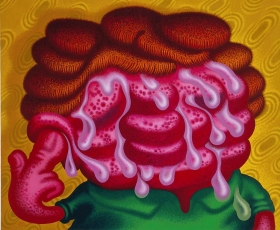 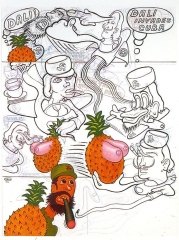 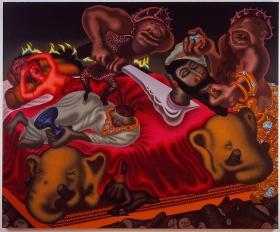 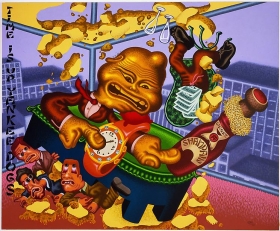 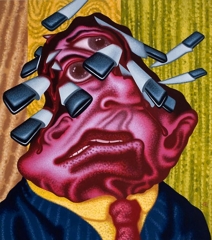 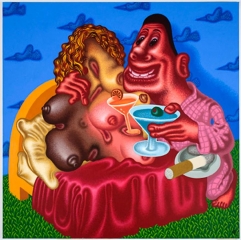 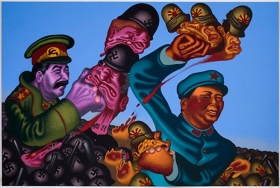 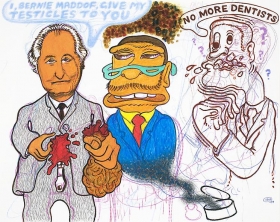 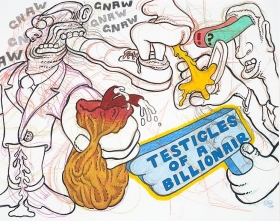 The exhi­bi­tion "Peter Saul: Sheer Terror" — ten large-format paint­ings and a selec­tion of works on paper — pro­vides insight into the 75 year-old Provoca­teur-in-Chief's work over the last decade. His undi­min­ished influ­ence on both younger and more estab­lished fel­low artists marks him out as one of the most important painters to emerge in Amer­ica after World War II. No sub­ject is too taboo for him, no per­son­al­ity deserv­ing of so much respect, that they cannot become sub­jects of his polem­ical and vio­lent paint­ings. Despite the aggres­sive and acerbic tone of most of his art, by nature, Saul is reserved, sensi­tive, and thoughtful, which is reflected in the rather old fash­ioned artists who he admires, like Caillebotte, Cadmus, Ensor, Beckmann. An avid museum and gallery goer, Saul goes to see as much paint­ing as he can in New York and on his trav­els. He learns from what he sees to cre­ate bells and whis­tles with paint and canvas to make view­ers stop in their tracks at an art exhi­bi­tion and notice his work.

From 1956 to 1964, Saul went to live in Europe. From afar, he wit­nessed the rise of Abs­tract Expres­sion­ism and the New York School as the zeitgeist of post-war Amer­ican art. The paint­ings he made in Europe were unlike any­thing else being made at the time. Pre­sag­ing the Amer­ican artist, Phillip Guston, they were both expres­sive and fig­u­ra­tive, and fea­tured dis­tinctly unartful motifs such as iceboxes, cars, toi­lets, and Don­ald Duck. From today's vantage point it is clear that Peter Saul had estab­lished him­self as a pro­gen­itor of what became widely known as Amer­ican Pop Art. In late 1950s' Paris he befriended the Chilean surre­al­ist and Abs­tract Expres­sion­ist Roberto Matta and scored his first successes in the "Salon de jeune pein­ture". His first solo exhi­bi­tions were to fol­low in New York and Chicago in 1961.

Upon his return to Amer­ica in 1964, Saul's style veered away from the expres­sive and painterly in favor of a hard-edged fig­u­ra­tive style fea­tur­ing dis­torted anatomy, acidic psychedelic col­ors, and an all-over, chaotic com­po­si­tion that cre­ated an ani­mated drama and ten­sion within the frame of the canvas. This highly charged cartoon style served the artist as a means to com­ment, dur­ing the late 1960s and early 1970s, on the profound rift within Amer­ican soci­ety over the Vietnam War and the strug­gle for racial equal­ity.

Despite the harsh tone of Saul's polit­ical paint­ings, he retained his sense of humor and poked fun at art world per­son­al­i­ties, politi­cians, and noto­ri­ous celebri­ties, from nuclear spy Ethel Rosenberg to football star O. J. Simp­son, from pres­i­dent Ronald Reagan to finan­cial fraudster Bernie Mad­off. Well aware of the importance of the history of por­trai­ture in West­ern art, Saul sat­i­rizes this genre in paint­ings like "Cold Sweat" (1999) and "Stuck" (2007). History paint­ing is another favorite of Saul's, and we fea­ture in this exhi­bi­tion "Sardana­pu­lus" (2005), a paint­ing elab­o­rat­ing on Eugène Delacroix's "The Death of Sardanapalus" (1827), though Saul's ver­sion takes place 20 min­utes after the king's dramatic sui­cide. "Stalin + Mao" (2009) shows the two men as a super­hero duo bash­ing in the heads of the Ger­mans and the Japa­nese dur­ing World War II. Saul's imag­ina­tion is also fed by current events, as evi­dent in "Chi­nese Busi­ness­man Lands on Wall Street" (2006), a humor­ous por­trayal of China's rise to the sta­tus of an eco­nomic super­power.

At the age of 75, Saul con­tin­ues to transform his own style and technique, cre­at­ing paint­ings that are refresh­ingly con­tem­po­rary. Recent paint­ings, like "Viva la Differ­ence" (2008), "Raccoon Artist Surprises the Art World" (2009), "Death by Champagne Cork" (2009), "Manz Best Friend" (2009), and "It's Not Can­cer" (2009), fea­ture Saul's irre­press­ible sense of humor and irony. He approaches life, death, love, and compan­ion­ship with a keen appre­cia­tion for the human con­di­tion.

Peter Saul has shown widely through­out Europe and the United States. In 2008, three Amer­ican institu­tions—the Orange County Museum of Art in New­port Beach, the Con­tem­po­rary Art Center in New Orleans, and the Penn­sylva­nia Academy of Fine Art in Philadel­phia—orga­nized a major and widely noted ret­ro­spec­tive of his career. His works can be found in the col­lec­tions of many muse­ums, among them the Centre George Pom­pidou and the Musée du Lou­vre in Paris, the Museum of Mod­ern Art and the Whitney Museum in New York, and the Art Institute in Chicago.

Peter Saul
Back To Top